For the past month we’ve been back in the UK basking in the ‘cool’ British weather soaking up country life on a grand scale. From our base on the southern English coast in Dorset we can happily see the Milky Way at night and watch shooting stars and satellites pass over head. The only noises to keep us awake at night are the nearby sheep or the incredible silence. This is definitely NOT Taipei where seeing one star in the sky is enough to cause excitement! 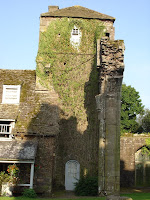 Some highlights of our trip so far include stay in the ruins of the 12C ruins of the Llanthony Abbey ruins in the Welsh Black Mountains. We stayed in the top of an ancient tower reached by a narrow twisting spiral staircase. (You can see our window in the pics.) We had to descend the 48 steps to get to our bathroom, which was shared with other guests. If the bathroom was occupied... Bummer! 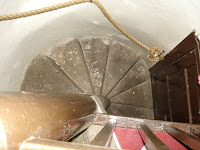 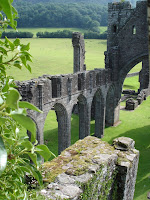 The breakfast was hearty and the surrounding countryside reaching up to barren moorlands. 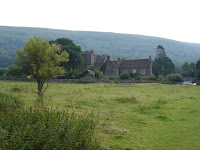 Then there was the fossil hunting on Dorset beaches – great fun. Just a couple of hours and look what we found. Recent bad weather had loosened the pyrites fossils from the mudstone cliffs. There’s nothing like coming across something so ancient and so beautifully detailed. 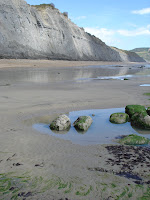 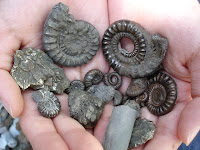 Of course I forgot to mention the typical changeable British weather and the high cost of everything which made us wince! Just one more week left and then back to Taipei. Sob!
Posted by Tim Budden at 8/09/2008 06:16:00 pm 5 comments: