Here's the newest piece from my recent show. Entitled 'Typhoon tales' it is cut into a 2m long silk paper scroll and displayed on a black paper background. Photographing such a strong red is frustratingly difficult so the photos don’t show the real colour. 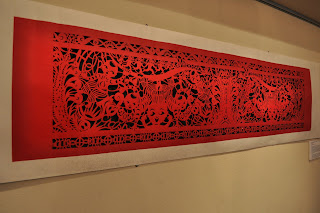 As an expat living in Taiwan two things I'm aware of are the abundance of motorbikes and the annual typhoons. Local TV news crews rush out to the windiest, stormiest point and foolish reporters try to file their live reports. They stand in the howling wind and rain, clinging to some inanimate object while holding a microphone. Their reports always state the obvious, “It’s windy here and the rain is heavy.” 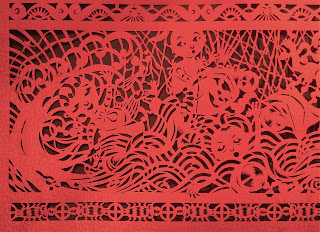 The other thing news crews do is to film other people out in the storm and they’ll always manage to find motorcyclists battling the winds and inevitably being blown off or getting stuck in floods. My question is why go out in such bloody awful weather on a motorbike? 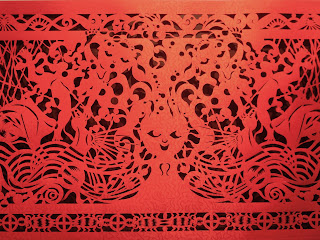 In this silk paper cut my dancing boys fear no storm, but even they are beaten by the mighty typhoon as they get swept along in the wind, rain and flood. 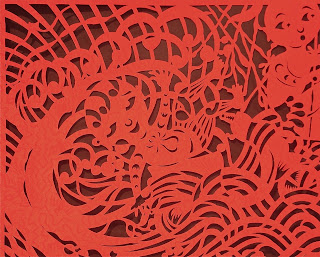 Here's one of the preliminary sketches. I spent a long, long time on the design process making sure that everything would hang together and not collapse. Papercutting is as much about the ‘architecture’ of the piece as well as the image. 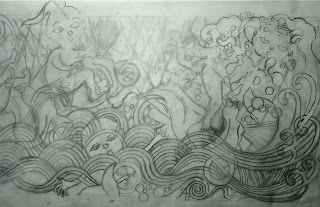 I’ve always admired those artists who can keep a regular blog. I, on the other hand find it hard at times to write – Maybe it’s because of the solitary lifestyle of the artist or maybe it’s laziness or not having anything to say.

I suppose my 3 month hiatus includes all of the above and more!

2011 is looking to be busy (but not yet busy enough to give up the day job!) I have my first major overseas exposure in Japan, which is exciting while my Taipei show will include children and adult workshops.

Kirie (Paper Cutting) of the World,

Here’s the opening party for the ARC show. The press were on hand (I wasn’t expecting that!). Click here to see a video and article in Chinese. 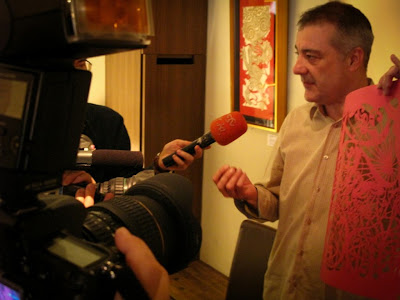 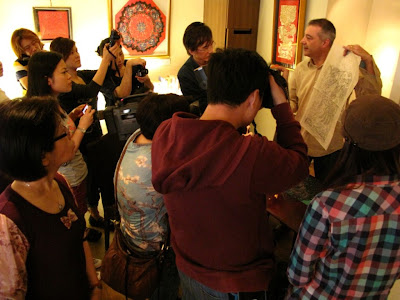 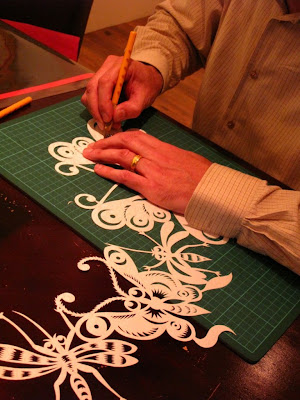 The centrepieces of the show were two x 2m cut silk scrolls. One was a reworking of a previous piece called Boom Boom Vroom! and the other was ‘Typhoon Tales’. Both involve my 'Daniel Dangerous Dancing Boy' characters as they get into all kinds of mischief on their scooters. I’ll write more about them in the next post 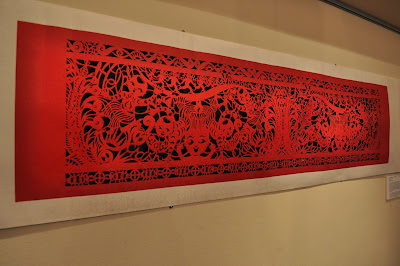