A walk on the wild side and then dahn the river!

I've just had a story published in a magazine here in Taipei. Based on an actual encounter with a territorial wild boar in the mountains of Taiwan, it tells the tale of how two lost, hapless middle aged expats escaped a terrible ordeal by the skin of their teeth! I illustrated the story with two silk paper cuts.
The first cut called 'A walk on the wild side' shows the lost duo being pursued by the 'man eating' wild boar and fleeing for their lives!!

The second cut, 'Dahn (Down) the river' shows the two still lost, but making their way down a river as they know it will lead them to the ocean nearby. In hindsight it was the hidden dangers that could have caused more serious problems, especially snakes that like to hangout on river banks. Luckily it was a cool day so they were hiding. Search carefully and you'll see many hidden creepy crawlies lurking in both pictures.

As usual I cut the illustrations using red silk paper which was then mounted on white silk. Gold silk was added to the water in 'Dahn the river' to emphasise the turbulent flow. If you want to read the full story of this 'epic adventure' click here and you'll find my article on p18. Enjoy!

Since I'm a pretty frugal person (though my wife would say otherwise!!) every time I finish a silk paper cut I'm left with heaps of beautifully shaped scraps. I hate to throw them away so I carefully collect and store them. I realized I needed to use them in some way, so I started sticking them onto unpainted bamboo bowls and plates.

This one I did months ago, but I decided to add a poem to it to see how the shapes and writing interacted. 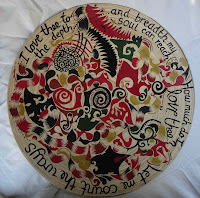 Here are some very recent examples, but instead of using scraps I purposely cut flower shapes out of silk paper and carefully glued them to the plate. 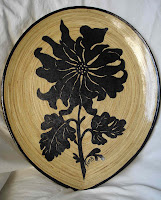 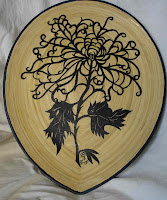 This last one is actually two layers of different colour silk paper slightly offset to give a blurring effect. 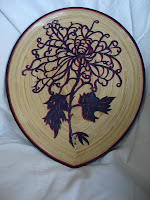