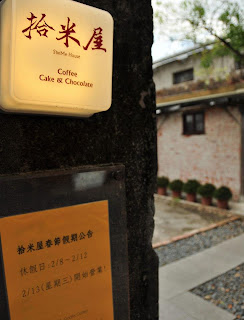 This is the SheMe café in Taipei. In Chinese its name means ‘Harvesting Rice’. It’s an old rice barn with a café built within its walls that has only been partially restored leaving bare concrete walls and gaps in the walls allowing sunlight and air to move freely in and around the space. This creates a space that is raw and natural. 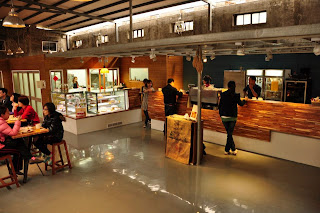 In December I was invited to create a piece for the café. I wanted to create an artwork that fitted the very distinct atmosphere of this old rice barn 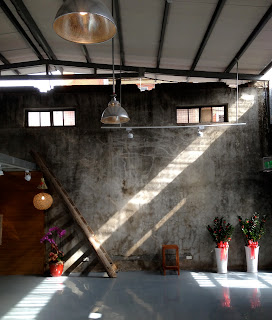 As soon as I saw this wall I knew I wanted to create an artwork for it. The light, colors and texture make this wall special. I wanted the breezes to gently blow the artwork and the sunlight to create flickering shadows on the walls. 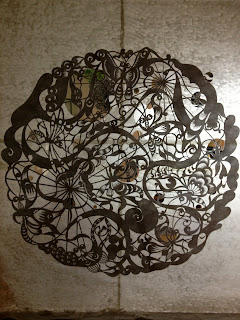 The design I chose is based on a papercut I did a few years ago based on an experience of encountering butterflies gliding in the mists of a high mountain peak. 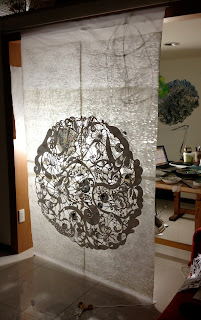 Here’s the artwork hanging in the studio. The cut itself is sandwiched between layers of fragile handmade paper that contrast with the solidity of the hard, thick heavy walls. 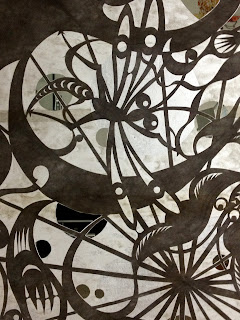 The piece seemed too solid so I cut holes in it to allow light and air to pass through. 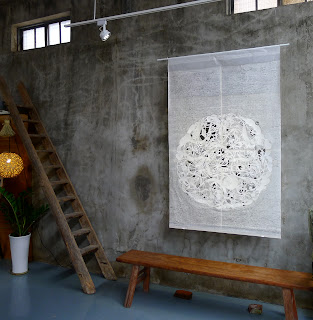 Here’s the piece hanging in the café by day... 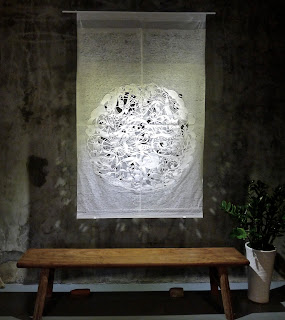 and by night…. notice the sunburst effect of the light shining on the wall.

I enjoyed the feeling as an artist of making a piece of work that directly relates to the environment in which it is located.

I was commissioned to create a lantern for Chinese New Year by Suho Paper Museum.

It took several weeks to design… one of the biggest designs I’ve ever done! I drew and re-drew the design several times until I was happy.

I decided to wrap it around a round paper lightshade. Here I am trying to see if my design fits. 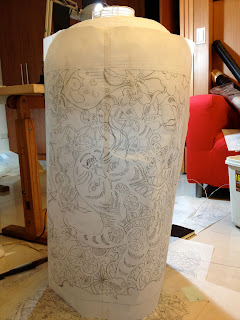 I traced the design onto the back of the silk paper I like to use. I cut two layers of silk paper at the same time…. and boy it took a long time to cut! 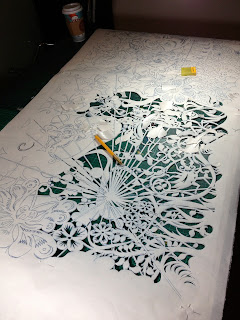 And I mean a long time! (note the coffee mug on the art work!!!) 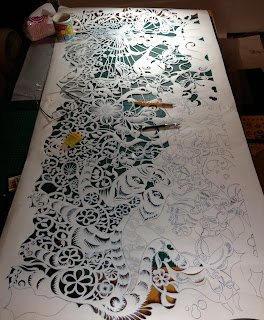 I tried a number of variations mounting the lantern. I offset the two layers to give a a shadow effect. 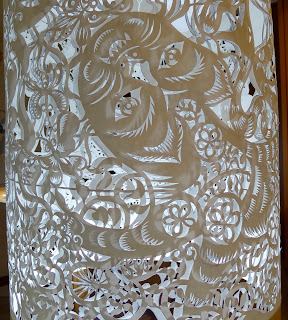 In the end I wrapped the whole thing in a fine transparent paper to give the image a translucent shadowy effect. 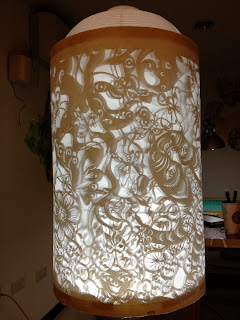 Hanging in the studio during the final stages. Almost done... Phew! 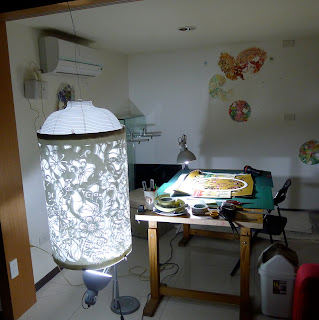 Here is the finished lantern hanging in one of the beautifully restored buildings of Bo Pi Liao in the Wanhua district of Taipei. 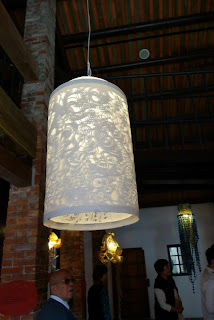 It'll be on display until the end of March 2013. After that it will be going to a private collection.