Nearly done!!! This is a project I've been working on for 4 months so far. It's a kind of fairy tale cut out of silk paper. By gluing several sheets of the paper together together, before cutting out the image, the paper can stand by itself. The idea that I can join all the silk paper cuts together into a kind of concertina book.

The story so far (see previous posts on March 10 and April 24 for parts 1 & 2):-
Daniel idly wanders into a forest where he is attacked by a gnarled, hungry tree. The unfortunate boy (Daniel) is overcome and finds himself being absorbed into the tree's pithy wood. 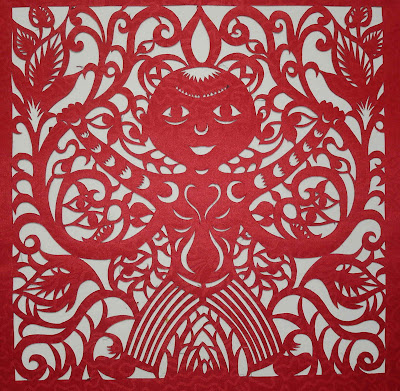 But Daniel is not as weak as he seems. Despite his dreamy looks there is a strength that dwells inside him. Exerting all his strength he breaks free of the branches (above). 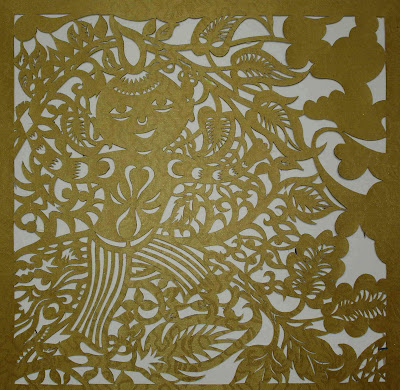 Then he forces his way up through the tree towards the light of the sky. 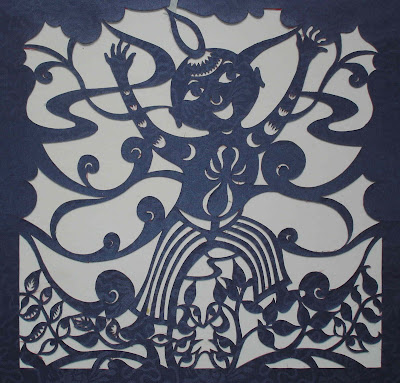 Once at the top he rejoices in his freedom. The winds come to whisk him away to safety.
Just to make the project even more difficult for myself I am now cutting out a page of text to accompany each picture. When will it ever end!!!!?????
Posted by Tim Budden at 5/31/2009 03:04:00 pm No comments: 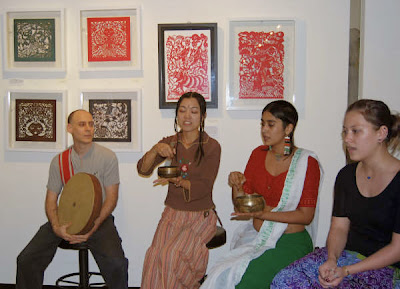 These are pictures from our 'successful' opening last weekend. 100 guests turned up - they drank all the wine, ate all the snacks, created a fantastic atmosphere, but didn't buy much!!! Despite that we all had a fantastic time. We were lucky enough to have Mia and Scott from Moving Sound give a performance.  They were joined by singers Ayesha and Anya. My work became  backdrop to their atonal chants. Truly wonderful music! 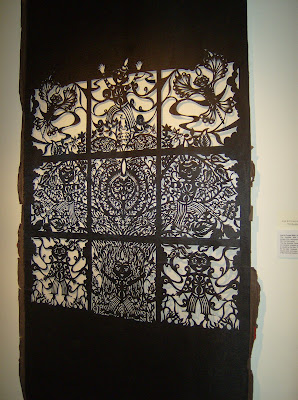 This large hanging piece "Lost in Forest Wild' (version 1) seemed to attract most attention. I put it at the last moment just to what it would look like. Other works which I laboured over (especially the framing) didn't get half as much attention. 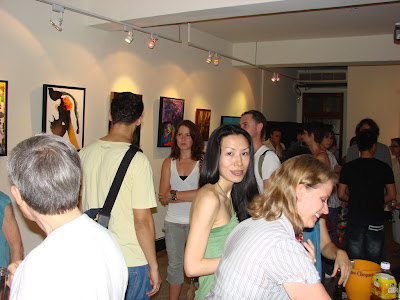 General views of the opening. 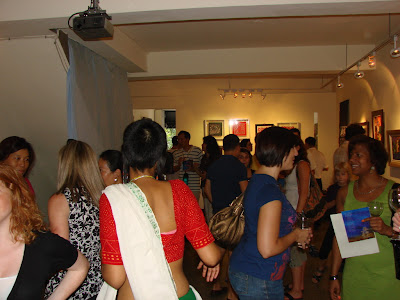 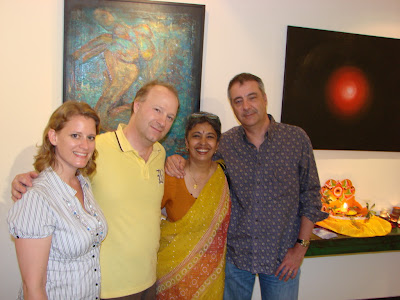 If you are in Taipei this upcoming weekend then you are very welcome to join the opening of the joint show titled 'Five Elements'. 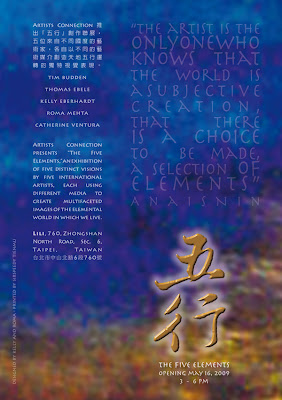 I'll post pics of the exhibition once I get a chance to take some decent pictures!
The show title is a very loose way to involve all five artists.  We've all interpreted it in different ways. For me the Anais Nin quote sums up my approach best - "The artist is the only one who knows that the world is a subjective creation, that there is a choice to be made, a selection of elements."
Posted by Tim Budden at 5/13/2009 06:38:00 pm No comments: