The Year of the Ox

Belated Happy New Year of the Ox! This is the most important festival of the year here in Taipei. The city becomes deserted with everyone returning to their ancestral homes. This gives us lots of time to wander and enjoy the empty streets. Here is my son, Adam, standing in front of Taipei city hall admiring the enormous paper cuttings without getting run over! 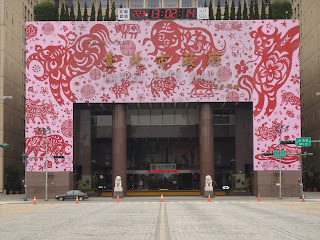 On New Year's Eve after the traditional evening meal with the in laws we returned home for midnight when all the windows were opened at 12am to let the New Year in and to say 'Hi' to the various Gods. That's also the time when the people set off the traditional firecrackers, leaving a lovely pungent smell of gunpowder in the air. 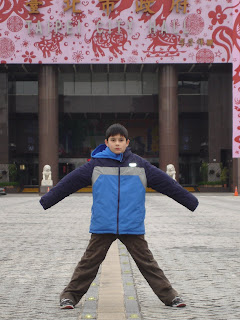 Last year was the year of the Rat. 'Coincidentally' we caught a rat in our house on the first day of the year of the rat!! We live on the 12F of a modern apartment building which is a heck of a climb for a little rodent. Anyway, I proudly boasted of my capture until someone told me that if the rat was killed (which it was) our fortune would leave the house. The credit crunch certainly saw to that!! Hopefully the year of the Ox (which is my sign) will bring us better luck. So far I haven't seen any sign of ox droppings in the kitchen....Yet!
Posted by Tim Budden at 1/29/2009 09:39:00 pm 3 comments: 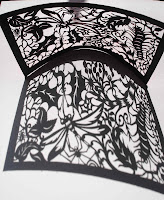 After a chilly week the sun came out today and while basking in the warm sunshine I took a few photos of my new 'Bug cut'. Since working on the silk paper cut 'Taipei Living' (2006) I've become interested in bugs - their long legs, bulging eyes, and general scuttleness fascinates me. The art work for 'A Walk on the Wild Side' (see previous post) had lots of bugs hidden away. This new cut can actually stand up as it's made from two pieces of silk glued to card. Boy, it was really hard to cut as it was so thick! 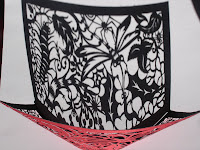 I'm thinking on new applications for my silk paper cutting and I'm really interested in getting my cuts to stand up and using light to play with the cut and shadows. 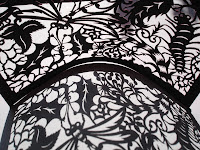